Skip to Content
Home Laptop Dell XPS 13 developer edition for programming – Is it the best laptop for developers?

Is Dell XPS 13 a best laptop for programming?

Throughout this review we will take a look at the Dell xps 13 Developer Edition 2020 laptop.

In addition, We will also endeavor to figure out whether the Dell XPS 13 can be the best laptop for programming.

Besides, I will also include all the information that you should consider when buying the right laptop for software development.

This evaluation post reflects my personal views and I will do my best by listing all the features and cons in terms of price, endurance and performance.

With its headquarters in Round Rock, Texas, the Dell Group is known and trusted worldwide as a leader when it comes to servers, smartphones, PCs, network security, and information security services, etc.

The Dell brand is synonymous for durability and consistent performance, and manufactures the most high quality and innovative solutions for all kinds of industries, such as consumer electronics, servers and storage, etc.

The Dell XPS Developer Edition is the type of professional laptop that you will purchase when you are looking for a long term solution.

Moreover, being a coder who spends hours sitting in front of a laptop doing programming or debugging, you will enjoy the high performance and sleek design.

However, it does not yet substitute the existing 9380 model, which will remain on the market, according to Barton George.

Confusingly, Dell is also using the model number 9300 for other XPS 13 series devices, like the Convertible 2-in-1 running on Windows. Therefore, prospective buyers have to pay special attention to which device is in their shopping cart during the online shopping.

Is Dell XPS 13 is the best laptop for Programming?

The CES is right on the doorstep, with most of the leading brand tech brands scheduled to show and introduce their new products in the coming week. Ahead of the event, the Dell announced its popular XPS 13 with an upgraded display, revised design and enhanced internals. In addition to the standard version, a new XPS 13 Developer Edition has also been announced. This 2020 XPS 13 has borrowed the design highlights from the 2-in-1 XPS 13 released last May, including the ability to be folded.

As part of its Project Sputnik initiatives, which began about eight years ago when Dell introduced its first developer-focused machines, the company is continuing to deliver state-of-the-art technology in its Developer Edition Laptop.

Since then, Dell has consistently delivered several Linux-based laptops with 150 Linux-based machines. While other major OEMs are only shipping Microsoft windows-based systems, the Dell XPS 13 Developer Edition is a popular option among programmers as well as other IT workers today.

Among one of the popular highlights of the Dell XPS 13 Developer Edition was a built-in support for 16GB and above RAM in order to run IDE’s and docker containers. The Dell responded positively the demands and is now offering laptop with up to 32GB of RAM.

The Dell XPS 13 is a pretty solid notebook. As a matter of fact, it is lightweight, meaning this device is portable to carry, slim and elegant. Not only does it look good, in fact, it performs incredibly well.

This latest release of Dell’s famous developer notebook features Dell’s first four sided InfinityEdge screen with a 16:10 aspect ratio versus the 16:9 screen found in the earlier version. In addition, this new Dell XPS 13 Developer Edition will even feature a 4K 3840 X 2400 touch screen panel and HDR 400.

This laptop is powered by a 52-Wh battery, which is expected to run for up to 19 hours in FHD + machines. Equipped with dual Thunderbolt 3 connectors, microSD memory card reader as well as a 3.5mm earphone jack. The notebook also features a fingerprint scanner which is integrated with the power button.

With its amazing capabilities, the XPS 13 Developer Edition is an appealing option for developers, general users, DevOps engineers as well as geeks and IT professionals. One of the rare PC or laptop manufacturers, the Dell is committed to serving the needs of Linux users by offering a range of dedicated laptops which are ready to go. Such commitment combined by Dell’s stellar support and reputation for innovation makes 2020 XPS 13 Developer Edition a very compelling alternative.

In other words, when you require a seamless system that lets you to attend the zoom video conferencing call, or developing software on VMs without any slowdown, then the Dell XPS 13 Developer Edition will be the best for programming.

Other Dell XPS 13 for Programming 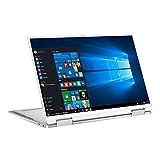 Featuring 10th generation Intel chips with improved power consumption as well as artificial intelligence, the newest XPS 13 2-in-1 by Dell bundles state-of-the-art mobile chips with improved performance to give you extra processing power when you need it. It also boasts an innovative design featuring two Thunderbolt 3 USB-C connectors for the quickest file transfer speeds while also providing the option of powering up external accessories.

In addition, the device is lightweight and only weighs 1.33 kg. This makes the Dell XPS 13 7390 ideal for programmers who requires the portable companion for traveling and keeping it in their bag.

Under the hood, XPS 13 comes with an impressive 13.4-inch display screen available in 1080p or 4K configurations. However, assuming that you’ re conscious about the battery life, consider the 1080p screens for extended battery life. In addition, the device comes with Windows Hello technology to enable prompt authentication using the biometric authentication method.

Dell’s XPS 13 has become a very popular laptop belonging to the XPS series, due to its perfect mix of technology and sleek design combining to not only makes this laptop looking stylish, but also it delivers unbeatable performance versus other competitors in the market.

It is simple to understand why XPS 13 by Dell can be considered the best laptop for coding you can currently purchase. While the screen is 13 inches diagonal, it has paper thin bezels, making the entire unit lighter than most 13 inch laptops – hence it’ s super portable, slim and lightweight. Both the trackpad and backlit keyboard of the laptop can be considered the best performers in the market,

It is equipped from the latest 8th generation Intel Core i7 processor as well as 16 GB of RAM, not to mention a hefty 512 GB SSD. Apart from being stylish, it also provides a lot of power. However, It may not be the ideal solution for gamers because of the Intel UHD Graphics 620 graphics card. The GPU is only able to run less CPU intensive games.

As you might already know that when it comes to high-end premium laptop products, many vendors such as Dell, HP, Lenovo, etc usually come up with different variations of a device. The Dell XPS 13 2019 laptop is also released with the Intel Core i5 and Core i7 processors.

Follows the same pattern. you can also pick between a full HD and a UHD screen. While the 13.3-inch 4K Ultra HD screen is designed to offer a fantastic look, most importantly, it is touch enabled. And for those of you who are looking to purchase any laptop with illuminated keyboards, this will help a lot in low-light situations.

At the core of the Dell XPS 13 2019 is a Intel Core i7-8565U processor clocked at 1.8GHz (with TurboBoost it can go up to 4.6GHz) which is supported and powered by a fast SSD with 512GB and 16GB RAM. It has sufficient performance for programming, data mining, or graphics designing work.

Please be advised that this laptop’s sibling, The Dell XPS 15 9570, features a 15.6-inch 4K touchscreen comes along with an NVIDIA GeForce GTX 1050 Ti 4GB graphics card, enabling it to be used for both data science and programming projects.

Last but not the least, it is a great portable laptop for software developers with a crisp display and solid hardware. However, we recommend that you buy it if you have a reasonable budget. For those who just want a casual laptop along with a back-lit keyboard, you should look forward to other interesting options.

This site uses Akismet to reduce spam. Learn how your comment data is processed.

This website uses cookies to improve your experience while you navigate through the website. Out of these cookies, the cookies that are categorized as necessary are stored on your browser as they are essential for the working of basic functionalities of the website. We also use third-party cookies that help us analyze and understand how you use this website. These cookies will be stored in your browser only with your consent. You also have the option to opt-out of these cookies. But opting out of some of these cookies may have an effect on your browsing experience.
Necessary Always Enabled
Necessary cookies are absolutely essential for the website to function properly. This category only includes cookies that ensures basic functionalities and security features of the website. These cookies do not store any personal information.
Non-necessary
Any cookies that may not be particularly necessary for the website to function and is used specifically to collect user personal data via analytics, ads, other embedded contents are termed as non-necessary cookies. It is mandatory to procure user consent prior to running these cookies on your website.
SAVE & ACCEPT